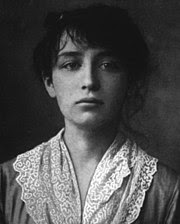 I watched the French film "Camille Claudel" this week and was amazed at the story. First of all, the film with gorgeous Isabel Adjani and Gerard Depardieu is intense and alive with romance and emotions. What these people do with clay makes the steamy pottery wheel scene in "Ghost" seem like a day at Color Me Mine!

The movie definitely drove me to learn more about the Camille Claudel, the artist. I love Rodin's work and will blog separately about him.

Camille Claudel (1865-1943) was an artist and a student and lover of Auguste Rodin. It was her entanglement with Rodin that caused her to suffer professionally and emotionally. She was overcome by paranoia, alcoholism and eventually, ended her days in an insane asylum. Interestingly enough, the asylum wanted to release her, but her brother and mother did not want her home. The movie showed she had a strong father behind her, which was not always the case in an era where women were not encouraged to pursue interests beyond the scope of marriage. He truly believed in her and pushed her to make her own name, independent of Rodin. There's some controversy on whether Rodin shaped her work or she his since their styles run similar designs.

To read more about her life, check this site for important events.

Here's another overview of her work at the Rodin Museum in Paris. (There's no need for me to reinvent the internet, is there?)

This is called "The Prayer" and it looks like it must have been an intense pleasure to sculpt. There's chaos and roughness around the face, which is surprisingly calm and composed. We have to wonder if that was how she felt -- her interior and exterior worlds in such opposition.

Another piece, called "The Gossips" led to an appropriate comment in the film.. There was a scene where she had her artwork showcased at a Salon and the patrons said the Gossips is so small, "it's like a secret that you can carry in your hand." One of the websites noted that Camille had stayed away from smaller more "feminine" sculptures and chosen the larger ones since they are more commanding and would put her on the same playing field as men.

I think I've been more taken by Camille Claudel because I love French art from that period. I've been to the Rodin museum in Paris and know her name. However, this movie brought forth the woman behind the art and she was just as fascinating and full of stories as her own work. I love Rodin's work, but I'm more than slightly annoyed at the man for what he did to her.

Anyway, I glanced through my Paris photo album looking for pictures or postcards of Rodin and/or Camille Claudel. I was surprised to find I had surreptitiously taken a photograph of Claudel's "The Waltz." I loved the movement, the strength in the arms and the entwined bodies. Quelle bonne chance!
at 5:57 PM

Beauttiful yet tragic story, isn't it? I love reading about artists - writers, poets, painters - they live with reckless abandon and without consequence....most of them anyway....