I was involved with 29Gifts.org project last year, in which you give something to someone for 29 days consecutively. I had extremely positive results during that time, and I've tried to make it part of my every day practice. (A gift doesn't need to be tangible item, but could be an email forwarded that helped someone else or even a compliment. It's an act of giving.)

I was travelling this week and found two opportunities to give and received warm results. The first was in line for coffee. I was waiting for mine, and the cashier took the order of the guy behind me. They were two friends, probably out of college, with the back packs and all, and like everyone else, they were in a rush at the airport. He needed to give $.17 and he was fumbling around with change in his pocket. He actually dropped some of his change into the fruit basket on the counter. The two guys were going back and forth "Where is it? Do you have it?" One of them was counting pennies out, while other was looking in the fruit basket.

Another cashier handed me back my change, which I checked. I turned around and placed a nickel in the one guy's open palm. They were so surprised because it worked out. I asked, "Is that all?" and they said "Yes! Thank you!" They both actually gushed about it. It was just a nickel! But, it really saved them time and they could run to their gate.

My second random act was on the return flight. It was a full flight, we were told. I had an aisle seat and another man was in the window seat. Then, a man came down the aisle and said "I'm right there. Oh boy!" He was about 6' and pretty large, so I first got up and let him in. He could barely get his legs in there and looked quite squished next to the other man, who was fairly tall too. I asked him, "Would you like to switch?"

"Not at all. We'll all be comfortable then."

So, since I'm 5'2, I could comfortably sit in the middle between them and he was able to stretch better with the aisle seat. He thanked me so many times, and I'm sure the window seat guy was happier not having elbows and knees jabbing into him too. Really, we're all just numbers to the airline. We get what they give us.

Just a reminder it only takes a small action to make a large impact. Please take some time to go the 29Gifts website and watch her video.

The art of acceptance is the art of making someone who has just done you a small favor wish that they might have done you a greater one. - Russell Lynes, editor/critic
at 9:40 AM 4 comments:

A lady in a man's world I don't mind living in a man's world as long as I can be a woman in it.
- Marilyn Monroe

I'm drawn to this phrase because I love being a woman, and don't want to be a man. Though there are times I've looked upon with envy as the guys just go out for a beer with nary a thought of others, while my girlfriends and I are wrought with guilt and disaster scenarios before we leave the house. But, I'm happier being the complicated woman rather than a simple minded man (*ducks*)
In my previous career, I worked with all females. Never had any issues with female managers, and actually preferred it. I had a male intern complain to me he worried about sexism and didn't think he could advance in the female dominated environment.
Once I switched into IT, I felt the change immediately. To me, gender is more powerful than race. I walk into a conference room and do a quick scan of male to female ratio and it's always less. There may be more Asians than Caucasians, but that doesn't concern me so much.
When I first joined my current company, I was thrilled with my IT team. My technical manager was a woman with three grown children, so she knew what it was like to be a working mom. My network administrator was 5'1, 120lbs red-headed ball of steel - woe is the soul who asks for permission to change access rights! Everyone quivered before her and her word was final. There were other female developers on the team as well. There was great synergy among the smart and competent women; we did have one token male developer.
Fast forward some years and personnel has changed and borders expanded. My team is national with over 10 individuals, though I work with many more. On my technical team, we have only 2 women, and I'm the only mom. Yes, we have some fathers and grandfathers, but we all know that fathers are not equal to mothers.
Sometimes I get frustrated with the battle of bloated egos. And, it is very hard to keep up with the demands of IT as a working mother. Recently, I was guiding another developer through a lengthy process 20 minutes before my daughter's Indian dance started; my client called me en route to the performance. It's when my two worlds collide that I have a problem. Can I go out for a drink with my colleagues after work? Yes, but it has to be planned so arrangements can be made. (Though, I brought my daughter along to the last one when my former boss had come)
I was travelling this week and noticed that the business travellers on the flights were mostly men. One benefit: While I can pull my suitcase in the overhead compartment 90% of the time, if there's a tall man available for 10% of the time, I'll take his help. Second benefit: I don't take up much seat so I could squeeze into the middle comfortably between the big guys.
Chivalry came into play at a recent conference where the female attendance was low. So, if I was standing at the booth waiting, I got immediate attention. And, even some cavalier men said "Please go ahead," which was great for me.
So, just because I am in a career dominated by men, it doesn't mean I want to be a man. Still like being treated like a lady (although I have crawled under desks to plug in connections, if required).
at 8:26 AM 2 comments:

My daughter is an Eloise fan and loves the books, animated stories and movie; a live action film was done in 2003 with Julie Andrews as, of course, the Nanny. The stories take place in the 1950's Plaza Hotel and the central character is the rambuctious and precocious Eloise who lives there. What a dream, isn't it? To have the run of a hotel - order room service, have adults wait upon you - How awesome! Eloise's self importance and sense of adventure go beyond her 6 years. And the energy she has to climb stairs and elevators is remarkable.

We were watching the film on the Disney Channel the other night and a couple of things struck me. This story could only take place in 1950's. Mom is in Paris (we're not sure where Eloise's father is), but she's quite glamorous as she was once a debutante. She leaves her with Nanny, who is obviously not doing a good job if Eloise is running amuck in the hotel. Nanny relaxes in the evening by smoking and watching boxing and horse races, while enjoying her scotch.
Could there be a real life Eloise in 2009? 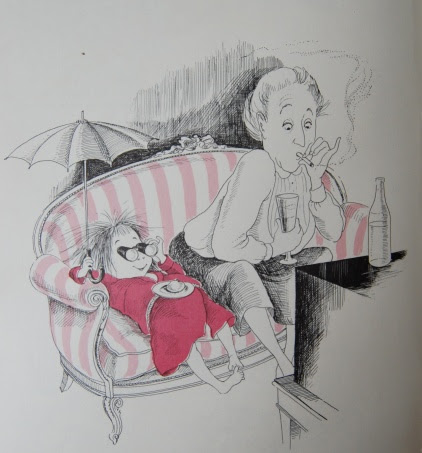 - Nanny would not have passed the background check --she must have some betting circuit going on the way she's so enthusiastic about races. The smoking and drinking while on duty would have also eliminated her.
- The new licensed Nanny would be driving Eloise to various lessons and classes everyday. That child has so much energy she should be channeling into dance, gymnastics, acrobatics and acting, since she has a flair for melodrama.
- Don't forget playdates to keep up her social interaction with her peers.
- In one way, I have to wonder if renting a room at the Plaza is cheaper than paying rent, maid service and take out in NYC?
- To keep Eloise in isolation at the Plaza, her tutors came to her. She might be taking some online tutorials if she needed to today.
- The Plaza would have put a stop to Eloise's antics on day 1 because she created risky situations that may result in potential legal ramifications against the hotel.
- Not to mention, there is probably stepped up security so unauthorized people couldn't enter the laundry rooms and kitchens.
- Mom would be emailing and IM'ing and texting the child constantly. She would want to make sure she had an active presence, if she couldn't physically be there.
I understand good heroes and heroines need to have absent parents in order to come forward and have adventures (e.g., killed by Valdemort, mysteriously disappear, tragically die). Also, kids like seeing other kids be bad. Eloise set the foundation for Junie B. Jones and probably Zack & Cody.