We saw Pixar's "Wall-E" recently and the group I went with had mixed reviews.

"No one talked!" said the 7-year-old, who made up for that loss during the movie.

"This was the most boring movie EVER!" proclaimed the 13-year-old.
"I feel asleep," the overworked mom admitted sheepishly.

As for myself, I liked it. I love looking at details in these movies and you can see they've captured so many nuances of human existance. I loved how Wall-E throws away a diamond ring for the box because it is a gadget.

There's also something about Wall-E's big eyes. I've read that humans have a natural affinity for big eyes - babies have big eyes, puppies have big eyes. When we see big eyes, instincts kick in and we are stirred. Those eyes make this trash compactor more human than some corporate executives!

The irony of this futuristic movie is the anthromorphization of the robots and how people lost their own humanity and became machines. It touches on the elements that make us human - touch, community, stars and the sky.

One problem I did notice is that for a movie about earth being lost, it looks like only Americans got saved and transported to their disaster recovery site. What happened to everyone else?

Now that Hollywood realizes their animated features are not just for kids anymore, they have to balance the subtle humor directed towards adults and entertain children. I noticed a lot of online reviews talk about Rubik's Cube, which triggers recogniton in adults. Even 750 years from now, it'll still be frustrating. There are lots of resemblances to "Star Wars," which gives the ship some familiarity to the adults. (We all know there are trash compactors aboard these starships)

Here's an article by Ben Burtt who did the sounds for Wall-E, as well as that other beloved Hollywood robot, R2D2.
at 8:44 AM No comments:

I had a great reading at Robin's Bookstore last week where I was one of the 3 featured poets in the Philadelphia Poets Journal's Annual Ethnic Voices event. It went really well and I was inspired to share more of my poems on this site and in future poetry events.
Here are two new poems:

When the moon finally
asked the earth to dance 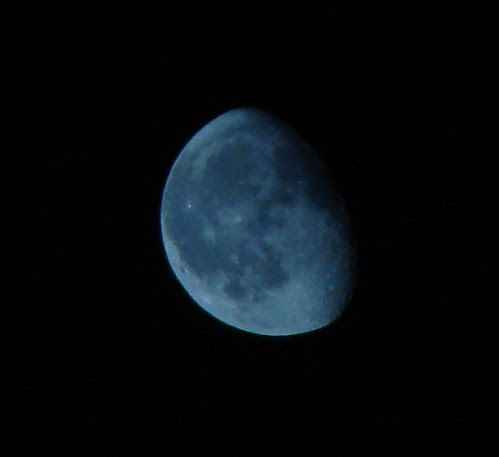 he gazed into her oceans as
she locked her eyes upon
his marble beauty.
They leaned in closer
and blocked the sun and stars.

Moonlight just happens.
It's a naughty, decadent light
that breaks the rules.
There are brazen lines of blue and silver
luminescence where there should be shadows.
Not the clear yellow light of the sun,
but droplets from the wanton satellite.
at 8:07 AM 1 comment: