It's Time for Jeopardy!

“Wait, I didn’t finish. I have to tell you something.”

So that’s how the conversations would end. If you needed to call my father, you’d have to call before or after he finished Jeopardy! If you called after, you would get a delightful recap of the show.

“Did you see the final Jeopardy question? Oh, you didn’t? I thought you would know it because it was about American Literature.” As an immigrant from India who came to the US 50 years ago, he was comfortable with majority of the British writers and Hollywood movies, but on Shakespeare and American popular culture, he would defer to me. If there were topics that were unfamiliar and intriguing, he would make a note and search online later to research.

"Oh, I learned something about about Roosevelts," and he would explain what he found on Wikipedia.

This show has been a part of our lives for years. Back in early 90’s, my roommate and I had a 7:30 evening class; we needed to leave by 7:15 to be on time. There were way too many days when we waited to hear final Jeopardy question before leaving, thus being late for class.

Jeopardy! has a way of making the audience feel smart, especially when one out performs the contestants, who are so impressive until they mess up. Personally, I have a happy dance I do when I get the Final Jeopardy answer correct and the contestants do not. When watching the show with my daughter, I always challenge her to answer specific categories related to her current schoolwork. She rolls her eyes at me, and may not have an idea. But the moment she does gets a question right, her self-esteem shoots up!

My father watched Jeopardy! religiously, more so after he retired. I suppose that when one retires, there’s a need for schedule and structure. So, the whole day can be spent on random activities and phone calls to friends, but come 7 pm, there’s an appointment to be kept. My father was always the happiest at home, as master of his own domain – and remote control. By the way, Dad was a Ken Jennings fan and had followed his streak passionately, and scolded me for games I missed.

Since 2000, my father was in and out of hospitals due to various cardiac health situations. He would often be hospitalized for days or a week or two. Of course, visiting hours hit in the evening, so we knew someone would be watching the show with him. We'd turn on the hospital TV and fuss with the angle and remote control volumes.

In June 2018, he was hospitalized for pneumonia, but it turned out to be kidney failure. We would be with him around the clock, as he moved on to dialysis. To help flush his kidneys, he was on low liquids. We held his hands as he feebly asked for water, which we could not give. Time moved slowly throughout the day as doctors and nurses came in and out, measuring and testing, and giving vague answers if any.

That 7 pm time slot was magical, a comfortable expectation of what we would experience. Alex is a reliable friend showing up, and reminding us the rest of the world was still normal. In his weakened state, he couldn’t follow along with the show. Was his hearing aid turned on? We tried to be cheerful and tried to ask him the questions in case he knew. The dialysis bed had a small TV on the side. So, it worked as a bit of distraction, as the machines droned rhythmically next to him, cleaning out his blood stream.

On August 20th, he passed away from multiple organ failure. It’s been difficult for the family and every friend who knew my father and his jovial spirit. My mother is living alone, and she said she watches the show every night too. This was their ritual she needs to uphold. One evening, she saw the lights flicker in the family room when Jeopardy! was on. She knew he was watching too.

When 7 pm rolls around, all of  us watch it as a way to get closer to my father. For about 30 minutes, we're remembering my father's excitement for trivia and his never-ending quest for knowledge. 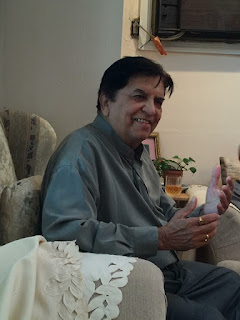