On the Job Training:Motherhood - Bratz, Barbies and Girlhood

A friend pointed me to this article by Meg Talbot, printed in the New Yorker: Little Hotties. I found absolutely realistic since I'm living this strange phenomena and the article is riveting because it dives into the history of popular dolls and how the marketers have controlled a generation of girls and parents.

First of all, I hate the Bratz. They're little tramps. They wear too much make up. They look like they got stung by a bee on their lips and are having an allergic reaction. They have no nose. Their eyes are just too alluring ("meet me in the bedroom"). They don't do anything except party and shop. What the hell are they all about? The article pointed out, "With Bratz, the company is selling the notion that divahood is something for girls to aspire to, with or without a talent to go with it." And, why do I want that for my daughter?

Annika started asking for these dolls when she was 4 and I said, "Not until you're six." She was cool with that and would tell her friends. Well, six is around the corner and I'm going to have to do a quick step now. I was hoping they would die down in 2 years, but these little hos have gotten stronger! She knows I don't like them, but I'm worried that my forbidding them will make them more enticing. However, I know where I stand on this and I can't allow or accept them. (I am publicly declaring that if she receives them as a gift, we will return them.) 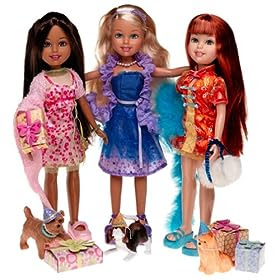 She loves her dolls -- a few ballerina Barbies, a Princess Jasmine doll, a nice Madeline doll and she'll be getting some wholesome Wee Friends dolls. By the way, Holly Hobbie is back -- it's the granddaughter of the original Holly Hobbie! Nickelodeon has revived her and I think she's really cute. I have no problem with little girls playing with 'teen' dolls, as long as their belly buttons are covered.

On the other side of the doll spectrum are the American Girl dolls. I'm not a big fan of American Girl dolls either. Mostly due to the obscene marketing techniques. You buy the $100 doll. Buy the doll $50 pajamas, and then another $50 to buy another set of pajamas for your daughter to match the doll's. They do cool things like customize your doll - so we could get a "tan" doll with dark curls that looks like her. But why? I'm not a totally mean mom - I let Annika browse through the American Girl catalog and we did take her to the American Girl store on Fifth Avenue. We just look, we don't buy anything.

I think that article pointed it out succinctly:"American Girl dolls -- expensive, innocent-looking, and old-fashioned -- are on one side of a class and cultural divide. Judging from the families you see shopping at American Girl Place, the dolls appeal disproportionately to well-off white parents willing to spend whatever it takes to help prolong their daughters’ childhood. Bratz and My Scene Barbies, by contrast, are peddling the toy world’s version of gangsta chic."

Most of the women I've talked to whose daughters have American Girl point out it was a gift from a grandmother and now they're looped into getting the accessories. However, I did see a mom sit and circle items in the catalog, which she gave to her mother-in-law as a Christmas wish list for her daughter.

By the way, I loved playing with dolls myself. I actually played until I was 11, believe it or not. For me it was creating my own stories or enacting a story I had read. I loved to look for little objects throughout the house and turn them into items for the dolls. I remember specifically playing right before bed and first thing in the morning. My mom used to get so annoyed because I wouldn't do anything else.

By the way, I find myself in a weird position when I'm scolding Annika to get ready for school and she wants to play with her dolls. It's like those weird out-of-body moments when people are floating and looking at themselves. But, now I'm in my mom's place and Annika is begging for just a "little bit longer"!

Annika has a small dollhouse and at the time, she was too young to take care of the furniture and accessories. So, I had put away all the extra pieces. She still plays actively with the house and her miniature dolls, but she uses her imagination. For example, she has a shell collection from the beach and the large shells have become as beds for her miniature dolls. She picked up an old lipstick holder to use as a bed and mirror. She has Disney Princesses mix with a half-naked Mowgli and a tiny blue-haired Trollz . She narrates and plays all the roles. I know I had to nudge and show her how to play when she was younger, but she really took off with this. I love watching her play and be creative.

Isn't that what doll play is -- imagining and creating a world of your own. It's not the pumped up Diva or matching pajama or customized doll bullshit.
at 11:09 PM

Holly Hobbie is coming back? Yahhy!
I agree with you Bratz dolls look like little sluts. Not exactly a good role model for young girls I admit, but then again what doll is?
How about sewing buttons on a corn cob?

Ok, J, can YOU sew the buttons on and let me know how it works out?

Phew...I thought I was the only one totally freaked out by these dolls. How damn inapproriate. I remember dolls when I was a kid, they didn't have breasts and they certainly weren't sexy. They were cute. And thank god you hate them because here I had all this self induced pressure to buy one of them for her but now I know exactly what I'm getting her :-)

I'm much too lazy to sew anything. But those corn cob dolls sure made Laura Ingalls on Little House on the Prairie happy. :)