For my immediate family, it has been stressful year on the home, career and marriage fronts. It's been tough, but isn't that what life is? We're not all living the good life of a Paris Hilton and frankly, I'd rather not be. It's all been a blur since last May when everything started falling apart. However the stars began to shift in the last quarter, and we can see better now. This is the time to pick up the fallen debris and make our choices -- either toss it or use it to rebuild or find another one.

There have been many exciting and positive events in the year especially related to children and friends. We've built stronger bonds with our friends -- learning that their laughter indicates deep-rooted strengths we all should have. When you're down-to-earth, everything falls into place.

This year, we've watched in amazement as a child was born, while others took their first steps into kindergarten, high school, or just up the stairs. My parents hit a few health related road bumps this year, but were able to recover nicely and move on to their next adventures.

My writing efforts started off with a bang and reveleation this year, but then had to take second stage with other events in my life. So, hopefully, I'll be able to steer that back on track this year.

~*~*~*~*~*~*~*~*~*~*~*~*~*~*~*
By the way, my sister, friends and I have been superstitious about deaths coming in 3's. When James Brown died early this week, I wondered if there would be 2 more. They would have to be "legends." Then came the news of Gerald Ford, and I was a saddened. I was extremely surprised by his interview with Bob Woodward, which he asked to release after his death. I've always been impressed when people ask for such things to be witheld until a death. In a way, it brings a certain diplomacy to Ford's name that he did not want to give his opinion publicly. No doubt that his words and opinions would have ricocheted off the political walls.

Anyway, I just read Saddam Hussein has been executed. This seems more surreal than anything.

This makes it the 3 legends this week. 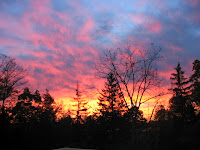 This is a photo of a sunrise as seen in my backyard. The backside of the house faces east and we can see a beautiful sunrise from any window facing that side - bedroom, bath, kitchen.

We can also see the moonrise and an on full moon nights, our house is flooded with a glowing blue light from the moon. As the moon moves, there would be silvery light in our foyer at 3 am.

Just a reminder that every sunset guarantees a sunrise.

That is a gorgeous sunrise! Now I know why you can get up in the mornings and be motivated to write :)