The Queen and the Soldier 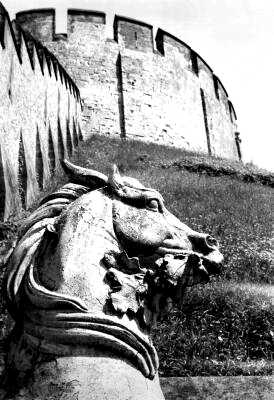 The Queen And The Soldier
- Suzanne Vega

The soldier came knocking upon the queen's door
He said, "I am not fighting for you any more"
The queen knew she'd seen his face someplace before
And slowly she let him inside.

He said, "I've watched your palace up here on the hill
And I've wondered who's the woman for whom we all kill
But I am leaving tomorrow and you can do what you will
Only first I am asking you why."

Down in the long narrow hall he was led
Into her rooms with her tapestries red
And she never once took the crown from her head
She asked him there to sit down.

He said, "I see you now, and you are so very young
But I've seen more battles lost than I have battles won
And I've got this intuition, says it's all for your fun
And now will you tell me why?"

The young queen, she fixed him with an arrogant eye
She said, "You won't understand, and you may as well not try"
But her face was a child's, and he thought she would cry
But she closed herself up like a fan.

And she said, "I've swallowed a secret burning thread
It cuts me inside, and often I've bled"
He laid his hand then on top of her head
And he bowed her down to the ground.

" Tell me how hungry are you? How weak you must feel
As you are living here alone, and you are never revealed
But I won't march again on your battlefield"
And he took her to the window to see.

And the sun, it was gold, though the sky, it was gray
And she wanted more than she ever could say
But she knew how it frightened her, and she turned away
And would not look at his face again.

And he said, "I want to live as an honest man
To get all I deserve and to give all I can
And to love a young woman who I don't understand
Your highness, your ways are very strange."

But the crown, it had fallen, and she thought she would break
And she stood there, ashamed of the way her heart ached
She took him to the doorstep and she asked him to wait
She would only be a moment inside.

Out in the distance her order was heard
And the soldier was killed, still waiting for her word
And while the queen went on strangling in the solitude she preferred
The battle continued on.

This song always stayed with me as a poet for its simplicity and the ability to tell a complicated story. The plot is quickly established and the characters are familiar. It has a fairy tale appeal with the surprising message. It moves very quickly.
I always loved the line, "And to love a young woman who I don't understand" because it makes it seem that men and women do not "get" each other and that is a fact of life. It's not a Mars/Venus phenomenon, but what it is and always has been. Also, the soldier's request for it makes male/female relationship become on of the pleasant struggles in life. The soldier wants that since he's seen enough of war and death that ensues.
This song came to mind earlier while listening to the news. In times of war and the unknown motivations of our leaders, it makes us realize that our story is not new. It also shows the common man being more grounded than the queen, and the queen is so vulnerable inspite of her strong facade. Those we deem as powerful are probably the weakest and use their power as a shield. And, the soldier chose to question and once he had the upper hand, she destroyed him for his actions.

(photograph of Arundel Castle, West Sussex England is from Photo-zen.com)

Email ThisBlogThis!Share to TwitterShare to FacebookShare to Pinterest
Labels: Lyrics