I shouldn't be surprised by the 9/11 coverage, but it's hard to watch the replaying of newscasts and these other films. I heard one radio doctor say that children who do not have a concept of time may find the constant replaying of the disaster disconcerting - i.e., they would think it's happening now.

I don't understand why we need to see this. 9/11 has not been forgotten. It's part of our every day reality. We wake up to news about US soldiers killed by roadside bombs in Iraq, Afghani children who can't go to school, the Iranian president's pronouncements against the west and the suffering of Lebanese families who can't recieve aid. These are all consequences of that day and the actions of this country.

Of course we all remember that day. I was in a morning grad class at that time. We left the classroom at 10 and there was a crowd in front of the TV monitors in the hallway. Someone explained to me that it was terrorist attack, hijackers at the WTC and Washington. I quickly called my husband and asked him if we knew anyone who was there, and thankfully he said no. I called my sister and father, and they were home and had not turned on the TV yet. My sister used to work at WTC and still had friends at her old company in the 2nd tower. She was trying to keep tabs all day with other friends who worked in the surrounding buildings. My cousin and uncle later had a trying day as they left NYC amidst the chaos.

I rushed home after the 2nd tower fell. I felt like planes were dropping from the sky. Everything was chaotic. I stopped to buy bread and felt incredibly guilty. How could I do something so mundane?

That day, we had my sister and my husband's brother come over. My mother-in-law was with us and I spent so many hours just holding my daughter, who was 7 months old. She represented all the goodness and promise in the world that was left. I remember we all needed to come together and wished for world peace in our way.

At that time, I was reading "Cracking India," which is about the Partition of India and Pakistan from the point of view of a young girl. After spending hours glued to the TV, I looked to the book for distraction. However, I had reached the section where Lenny's world changes overnight. Now that we just witnessed this tragedy, I understood exactly how this could happen and change your view of the world. We went from feeling light to feeling suddenly vulnerable, exposed and frightened of our neighbors. I met Bapsi Sidhwa at a writer's conference last year and I was able to tell her how her book paralleled events for me.

After my class, I had stopped at the computer lab and everyone was glued to the TV monitors. There was a Russian classmate, who leaned over to me and made a comment about this being America's problem and we could 'go back to where we came from, you know?" I just said 'ok' to her. For me to go back to where I came from would be to go to NY.

I call myself a New Yorker at heart. I grew up in Queens, migrated to NJ in my early teens and out west to PA after marriage. I worked in NYC and loved the rhythm of the city. I still do. I remember going to the WTC after work with my sister. There was a bar downstairs (it began with M?). After a drink, we'd have to catch the train back to NJ. I remember running through the towers to the Path station and it took me a long time! That's part of the whole disaster that stuns me. The size, the enormity of it. How could people even get out of the building that big? 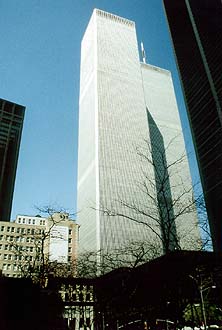 When I would emerge from a subway downtown, I'd look for the Towers to orient myself. When I was midtown, I'd look for the Empire State building. Invariably, I'd still walk in the wrong direction. We have a photograph of me when I was 3 against the backdrop of the NY skyline. The twin towers are still under construction. I remember when I was a little older my friend Ken and I would argue about which building was taller - the WTC or Empire State. We had nothing else to do in the backseat on roadtrips anyway.

After the towers fell, the only pictures you saw were the ones of the towers in flames, lit like wild candles. I hated those posters and shirts that came out later with pictures of the towers on there. I did not want to see them at all. It seemed obscene.

Then after some time, I sought out pictures of the towers. In the opening credits of "Friends" or in a movie that showed the NY skyline. It suddenly seemed comforting, reminscent of simpler times.
at 10:40 PM

I had a very rough Monday dealing with this. I didnt want anything to do with the day or the towers. They are in the backdrop of pictures on my cubicle walls and sometimes they are there exactly where they were in the sky if I look down 5th Avenue just at the right angle.

It was a rough day. I nearly lost my brother and lost a friend. He lost his best friend.

PS: The bar you are thinking of was Morans. I was there the Saturday night before that fateful Tuesday having drinks with my friend who suddenly after Tuesday was no more. Her parents had no body to burn. That was the hardest thing of this tragedy. Ashes to ashes dust to dust...

I wasn't in the United States at the time of 9/11/2001. I was in Italy on a vacation. After I found out the 2 towers had fallen I went back to the hotel and saw the coverage on the BBC, a British network, already several hours after the 2 towers had fallen. The BBC coverage was good, but it was distant. I mean geographically the 2 places are distant so it was what one would expect. I obviously know what happened, but it was enlightening to see what I missed on American TV, in the early hours, the panic in everybody, from civilians, news reporters and confused officials.
It was an American experience that I missed, and even though I was very sad and depressed 5 years later, I am glad that I watched it.