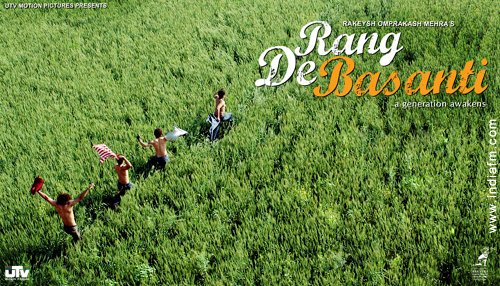 What an amazing movie.

I heard a lot of positive things about this movie, and actually tried to see it in the theater. (I haven’t seen a Hindi film in a theater since 1997 "DDLJ"; I’m quite fine with DVD and the power to fast forward).

Here's a link to the story (please come back and finish my review though!)

I thought the filmmaking by Rakesh Omprakash Mehra was impressive. I liked the juxtaposition of the present day characters with their freedom fighter counterparts. The editing was crisp and flawless. I don’t think I’ve seen any movies with that kind of hip and sharp music and video editing.

You have to look at it in two parts and I think he went over the top at times. However, I think you may have to for an audience, which may not be accustomed to cinematic subtleties. So, sometimes it felt a bit forced, but I think the director needed that. The biggest complaint against this movie is the last part not being realistic. Agree, perhaps it would happen in or in a repressive society, and not in . However, it's the idea of it happening in being more shocking. You have to think of 1970 shootings at Univ in OH, where student protestors were shot and killed by the National Guard. That shocked the country, and the film shows a similiar shake-up.

The AR Rahman music is good as always - slamming down on the perfect balance of hip western and classical Indian styles. Unlike other Bollywood movies, the music is tied to the movie, so it must be seen *with* the movie to be appreciated more.

The first part of the movie was fun, though I had to wonder how long the care-free depiction would go on. I was wondering, “Why are you guys sleeping in the sun? You haven’t been doing anything, but lounging around anyway.”

They really showed the beauty of through historic sites and landscape. It would have created a richer depiction if they had presented the more common people of as well. In a way, that’s the life the characters led – isolation from and life.

However, the beauty of the friendship was the blending of religions and cultures, especially the way Sue was enveloped into their group. Maybe it was Aamir Khan, but it reminded me of the comradery portrayed in "1947 Earth" before the Partition, where they were friends and Indians before they were Hindu, Muslim, Sikh.

Watching the scenes of the freedom fighters was powerful and you cannot watch without being moved by it. I couldn’t help but think about the war in . Is it a matter of semantics - what do we call those that want to shake the occupation - freedom fighters, rebels, insurgents? Watching the torture scenes and prisoners who are not afraid to die reminded me of what is happening now. I don’t want this movie review to become politically entwined, but if the purpose is to show the story of freedom fighters lives on, then it would live on in different forms and countries. People always fighting for what they believe.

Anyway, I found it a bit disheartening that Blondie spoke better Hindi than I can with her two weeks of night classes. The Indian directors now are really talented. Once they are given permission to step away from the Bollywood formula, it's really exciting to see what they can do.

I love hindi songs!Check out freehindilyrics.com it has awesome lyrics from thousands of songs.