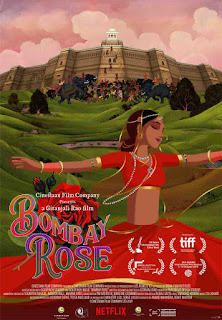 I have been seeing trailers about Gitanjali Rao’s “BombayRose” on social media since it was released in 2019, so I was so eager to see it finally on Netflix.

It is an hour and half of beautiful hand animation, a love story to Mumbai. Each frame is so beautifully crafted, and the music is hypnotic and transformative.

The movie begins with the faceless crowds of Mumbai going about their daily hustle. It focuses on the main character – Kamala. By the way, keep your eyes open for all the subtle and not so subtle references to flowers. Kamala is a lotus flower and even later I noticed a shop with the name Gulabi, which is a rose.

I don’t want to say much about the story because it is so different, and one should enjoy the visual experience. The story line is a your basic Hindu girl selling flowers and a Muslim boy catching her eye on the street, each dreaming of the life they wish they could have. Their intricate backstories are revealed slowly, and characters' interactions cross over eventually - all woven together.

As a true love letter to Mumbai – or Bombay as it is always known in people’s hearts – Rao addresses the microcosm of cultures in the city and the languages. We have Salim from Kashmir, the Maharashtrian sellers in the market, the Goan Christian teacher who was a former film starlet. The movie doesn’t shy away from tough real life topics – child labor, sexual exploitation/prostitution, gangsters, poverty. However, these are not faceless characters anymore – we know them and their struggles.

What stands out in this film is the story of Shirley D’Souza, an elderly woman who reminiscences about the old days. As she steps out onto the pavement, the city turns black and white and back to 1950s. She loves her cigarette and whiskey and reliving memories of her youth. These are the shops and the buses my parents talked about riding; the streets are quieter and not as populated. Above all, we loved the Konkani music! We had to look up one of the songs – “Red Rose” by Lorna Cordeiro. The video has the English translation of lyrics and it’s so great! (And, another rose was delivered)

In a way, Shirley’s story seemed separate from Kamala’s, almost as if it could be its own movie, complete with a love story and tragic heroine. However, the narrative is strong enough to bring it all together in the end.

It moves slowly and thoughtfully, but it's so engaging. It would be a good introduction to Mumbai for some, but lots of nostalgia for others.