I'm returning from a week in Portland, OR for a business trip and did get to explore around a bit. Here's a recap for future reference.

The first night, we hit Indian food. I was excited since I had been traveling the whole day and just arrived to a rainy and chilly Portland. For me, Indian food is comfort food. Get me some naan and dal, and I'm good to go!

We went to the one in Hillsboro and I loved the rich ambiance. There was a painting of an elephant that I wanted to steal because it was so amazing. The chairs are heavy wooden antique style, that require 2 hands to move due to the weight. Copper tins abound. Definitely an impressive place.

For the menu, it had pretty traditional options. I liked that they did have a section where you pick your chicken/lamb/shrimp, and then select the style of cooking (karai, tikka masala, etc). The samosas were freshly made. We requested varying degrees of spiciness so that could be adjusted.

I skipped the gulab jamun because I only eat my mother's recipe. However, the masala chai was warm and creamy. The lassi is served in a tall milkshake glass, so that's a good sized portion.

Jake's Crawfish
The next night we wanted something more traditional to Portland. Jake's has been there for 110 years and right in the heart of the city.

The menu is predominantly seafood so I'm assuming vegetarian requests would be off-menu. The selection of seafood is varied and they identify the region that sources the product. I had a blackened salmon (swordfish was out) and the dish was enjoyable. Personally, I wasn't blown away, but it was a good solid dish. My colleagues did enjoy their selections.  We were looking to get regional specialties for Northwest, which we did.


Red Star Tavern
Now we've ventured toward Pioneer Plaza area. Streets are lined with high-end and low-end shopping, movie theaters, hotels and restaurants. It was raining that evening (surprise, surprise). We couldn't really walk around so we ducked into a Hilton and asked the concierge for restaurant recommendations. He suggested we check out Red Star Tavern for the Northwest regional cuisine. Umbrellas out!

Definitely a beautiful chic place that has a male vibe to it. Dark furniture, secret bookcase to a private room/speak easy. I ordered a Saint 75 cocktail (Aviation gin, elderflower, lemon, sparkling wine) and it was delightful (Isn't that the only word you can use when you have sparkling wine?).

Their dinner menu is pretty tight. Barely one page of content. They have small plates, sides, entrees. There are nods to vegetarians. The Oregon rock fish was very good and flavorful. Two colleagues chose the Chef's dinner, which included starter and desserts.

This would be a good place to experience those dishes you see on "Top Chef" (now, what exactly is a Hamachi Crudo with apple, fresno chile, carrot, salmon roe?)

Paley's Place
For our last proper meal in Portland, we stumbled upon the northwest area of Portland with rows of restaurants and bars. We had lots to choose and randomly picked French cuisine at Paley's. This restaurant is inside a house, so it has a cozy atmosphere. Of course, when it's cozy, you need to wait for a table. Fortunately there was a spot at the bar and we could try out some wines and their cocktails. Their Bermuda Triangle was warmed rum and cider, nicely mixed with cinnamon and lime. On a cool evening, this was good way to warm up.

The menu doesn't have any vegetarian options, so I'm sure one would need to request off-menu. There's creative meat options for sure including sweatbreads, escargots, rabbit and marrow. For the sides, the roasted beets were fabulous and I need to know the recipe so I can make it every day. Colleagues loved the lamb special.

The one odd thing for the group was the vegetables were served as a 2nd course, while we thought of them as a side with the entree. It threw some people off, but the staff was understanding to our expectations. By the way, the staff was uber-attentive and the bartender was charming and knowledgeable. They work hard to make it a good experience. 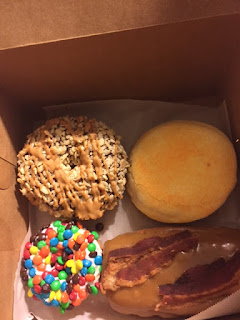 I had a running corny joke with my Portland colleague for so many years. Whenever we had a conference call, I'd say "I'll bring the coffee, you bring the donuts." So he had told us they had a famous place in Portland and they did maple bacon donuts, were on the Food Channel, etc. 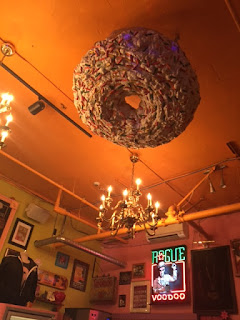 When I learned I was going out there, I told everyone I must go to Voodoo Doughnuts. So, we had that on the agenda every day and finally made a stop Wednesday evening. We all chose different ones - Rice Krispies and peanut butter atop chocolate frosting, a mango tango cream, a maple bacon and one covered in mini M&Ms.

I was excited by the ambiance too - the large doughnut  on the ceiling is outrageous. If you visit their site and click on their Doughnut list, they have all their crazy flavors noted.

By the way, the next day a colleague grabbed a tray of doughnuts from another bakery. Those were spectacular too! Portland takes it's doughnuts seriously.

Powell's Books
So, it's not just about eating. The next essential element for life - at least for me - are bookstores. Someone directed me to Powell's and we are grateful.

I don't want to describe the store because I won't do it justice. It's not slick and shiny. It's laid out in a fashion that must be learned by experience of walking through the shelves. Yes, as first time visitors, we were lost and weren't sure which level was coming and going, and where exactly are adult fiction. They tried to color code sections, but we were still not sure.

Because of the labyrinth-like layout, there's more discovery allowed. Turning a corner, you don't know what it means by Film Books until you land there and see books about so many movies and filmmakers. Being a used and new bookstore, the collections are vast and you're more likely to find an out of date book here than on Amazon.

I was tickled to see books I had heard about recently online or on the radio. Now, I could finally hold them. Because I'm traveling and my bags were quite full, I had to restrain myself from buying any excess books.

My greatest find was poster book of Sanjay Patel's deities. As I was telling my colleagues about it, I just embraced this book and said "It's mine." Fortunately it lay flat in my bag so the packing wasn't an issue.

As I browsed around, I was floored to see a huge book case of books by journalists. Then, I made a bee line for the poetry books. To see so many Pablo Neruda books on the shelf was amazing. I sat down on the concrete floor and almost cried touching all these books. I snagged "The Captain's Verses."

My colleagues also found books that they were looking for and more than they expected. I know we didn't finish the store as we had run over after dinner and they were closing at 11.

Until next time, Portland!