Maya Angelou had a story in her collection "Wouldn't Take Nothing For My Journey Now" about traveling abroad and how the experience broadens one's mind. Americans don't know what it's like to travel half a day in either direction and experience new language, new food or new customs. Maya Angelou had said there's such a beauty when the cultures and languages collide (Sorry for lack of direct reference - I had the audiocassette version of this book and can't look it up.). I'm a strong advocate of study abroad programs and even for adults to work and/or live abroad. My husband was regularly traveling to Germany years ago and for every opportunity he had, he would drive to Switzerland or France or another city inside of Germany. On the other hand, there were colleagues who stayed in the hotel over the weekend and didn't bother venturing anywhere. Even when I travel for work, I try to allow a few hours freedom to see the local area at some point. I had a very exciting year traveling for work, but I had time to spend in Toronto and few evening hours in Los Angeles.

During my Madrid experience, I was challenged by the language barrier with my 6th grade Spanish skills. I studied French all through high school and college, and it only comes in handy to watch foreign films. My sister had studied Spanish and then proceeded to use it at various employments and situations. Therefore, she has a strong foundation and experience with it. Guess which language my daughter is going to learn?

In Spain, I could navigate sometimes when the French and Spanish overlapped (e.g., "tirar" in Spanish is to pull while "tirer" in French). Then other times it was quite a challenge to order a cup of coffee or ask someone for directions. We were quite surprised that a lot of people we interacted with did not speak English (e.g., random waitress, ticket vendors, traffic officers). On the other hand, the native Spanish speakers were really appreciative if you tried to piece a sentence together,  no matter how badly. They would help you along to complete your thoughts.

There's something about that mental challenge of learning new languages. The minute I knew I had to talk to someone, my brain started churning. It was embarrassing that a bunch of us often threw in other languages when stressed. Our brains could recognized it as a foreign word - but just the wrong language!

I've been in this situation before in my life, and it could be frustrating and exhausting when communication fails. I've married into a family that doesn't speak the same language as mine, and it was hard to learn a new language. However, I tried the same systematic technique I learned French, as well as constant interruptions to discussions to make sure I understood the flow.  I actually believe I have strong comprehension skills for languages, while my speaking skills are rough. So by the end of the week, I could understand a speaker  better than I did earlier.

People Magnet
Had we stayed in a sleepy suburban town, I might not have much to say here. However, being in Madrid, we had the opportunity to meet people from different places. There was a replanted Swiss gentleman with his two boys who helped us navigate the Metro. A neighbor who came onto the hotel balcony during the protests was a Swede on business.Then there was the lovely English couple - senior citizens with back packs who had just arrived in Madrid - who recommended restaurants from their guide to us and we felt old friends when we met them at one of them. My absolutely favorite multicultural moment was dancing to "Gangnam Style" with 2 Londoners, 3 Russian girls and Spaniards at an Irish pub!

What I find most fascinating as an American meeting foreigners on different soil is their perception of the US. We were in Europe one week after the re-election of Barack Obama. So, generally upon hearing we were American, their first comments where how pleased they were that Obama won. The Swedish neighbor said 95% of country wanted this. Some people had met other Americans who were Romney supporters and were stunned. This is so important because this is an example of what US role is in the world stage. People in the US tend gaze at their belly button and not realizing everyone is waiting for action.


Occupy Europe
We were also there on November 14th, when anti-austerity demonstrations were taking place all over Europe. Our hotel was on Gran Via, which we referred to as the "Fifth Avenue of Madrid." From our hotel room, we could see all the activity on the main street, which usually picked up in the evening and it became an exciting area. 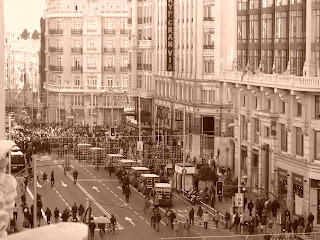 On the 14th, we found ourselves on a main artery of the demonstration path as people marched toward the government buildings.These are photos from our balcony as thousands of people gathered. It was a 24 hour strike, so it literally started at 1am. We had hundreds of people chanting and marching in the streets, police vehicles and helicopters flying overhead (this was when we met the Swedish neighbor). They started again in the morning by 8a.m and I've got lots of photos and videos of the activity. It's surprising how loud a thousand people can get! 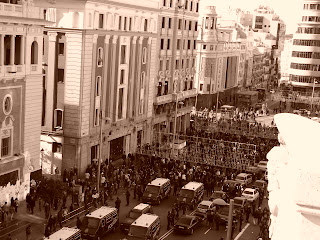 We said this was a once in a lifetime experience and after seeing the museums, cathedrals and palaces, this is modern Europe. People wanting their voices heard, whether they are in Madrid or Rome or Paris. 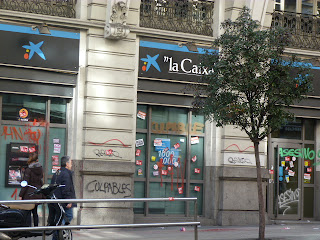 After the protests, we walked down the main street and saw that the protestors had defaced a lot of the private property. There were stickers plastered and spray painted messages on windows and doors.

These are pictures of the La Caixa bank and the Loewe store,which represent the 1% (in US terms). You could feel the anger the people have towards the banks that profited, while the people had to pay. 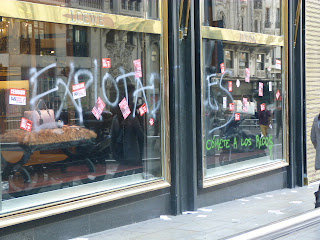 That day, we took advantage of the closed train stations and shops and staying out of the museum district, by spending the afternoon in El Retiro (the "Central Park of Madrid", but more palatial). We ran into the 1000's again in the evening by Plaza Cibeles, but fortunately followed some other folks through the back streets to the hotel.

In the evening, we had gone out for post-dinner drink and we meandered through the prostitutes and night tourism. We saw crowds on one street towards Puerto Del Sol, and then we heard police firing. At that point, people started running. We decided to run the other way, towards the Guinness beer sign on a pub!

When I returned home and told my colleagues and others about this, about 99% gave me blank stares. These are your average Americans who listen to local news station and that's their main source. The 1% who did know where actually immigrants who listen to NPR and BBC world news. Don't get me started on this.