When it comes to music, I've fallen hard and fast in love with three artists.

Gotye - Somebody I Used to Know.
I heard this on the radio a few weeks ago, and I had to see it who sang it. Then I saw the official video and loved the intensity of the song and depiction. Then, I fell for the cover of the song by Walk off the Earth.  Of course, there's the the parody of the cover of the song which made me laugh out loud like I haven't in long time. (Please watch these in order, else it won't make sense, which I admit I did not).

The song starts so subtly, and the way it breaks with the female voice is just chilling. The song is all over the place because the lyrics are potent - you hurt me, you're no longer in my life as someone I love, but someone I used to know. Everyone can relate to this one.

He could go for a sequel -- "Somebody I Used to Know... But Now You're on My Facebook and I See Your Status Every Day."

By the way, they did this song on "Glee," which is the way our society confirms one has arrived. The song was sung by two brothers, which shows how this song could be interpreted. I also heard some remix of it on the local pop music station. That's an injustice. It became a hit with its own simplicity. It didn't need extra music in the back. So why add it now? Who is it for?

Here's one more picture of Gotye, just because. 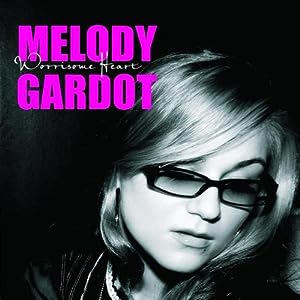 Melody Gardot
She suddenly popped up on my Adele station on Pandora. I immediately paused it and went to YouTube to find out more about her. Then I couldn't stop. I was hooked.

I watched her Accidental Musician (Parts 1-4) while I was working. I ain't gonna tell you anything about her because I want you to go listen.

She's popular in Europe, but she's from Philly no less and she's absent here. She's soothing, sexy, soulful, meaningful. One song that shows her range is "If the Stars Were Mine" because you're in Rio.. you're in New York..you're in Paris. She's so natural. She just flows. Her music is perfect to listen to at work - it's quiet enough not to be a distraction from work, yet enough of a distraction to imagine I'm in a Parisian night club and not at work.

I can listen to her for hours. And have.

Adele
I had a colleague who wanted to be "a black back up singer" in her next life, full of soul and power as she was a petite Italian-American girl. (On a side note, I wouldn't mind coming back as a 60's nightclub singer like Zeenat Aman singing Churaliya).

But, alas, the black back-up singer has come back in the body of a young English girl as a lead singer who owns the world. Did she really record "21" when she was 21 years old? She's truly an old soul. Adele has touched so many people because of the emotion and pain she emotes in her songs.  The melodies harken the soulful sounds of 60's and 70's and amplifies them with the rules of this decade.

The greatest part is that Adele is a CD that my husband, daughter and I all listen to in the car. My daughter doesn't understand the complexity of the lyrics for "My One and Only," but is hooked on the vocal fluctuations of  "He Won't Go."

When I first truly listened to "Set Fire to the Rain", I was on a plane. I had heard it enough on Pandora. I played it over and over, wiping tears from eyes over her pain. (My God, "watched it pour as I touched your face".)

Right now, "My One and Only" is the song that's breaking me while I'm driving around town. "I dare you to let me be..your one and only." Daaaayyyyammm!! How do you come up with those words and then roar them perfectly, showing vulnerability and strength in one chorus.

"You listening to Gotye again?"

That Gotye video - I love that frame when they zoom out and the girl first appears in the picture. It looks so two dimentional and yet so complex!

That picture could be the center piece of my living room.