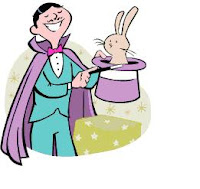 While at a magic show at a recent birthday party, I started mulling over the concept of magic.

This magician was tall, moustached and average looking. I'm sure he has a regular job as reliable citizen of society. On weekends, he breaks out his red vest and tie and becomes a Magician. He captures the attention of children and excites them by bringing them into the spotlight as assistants. He tells corny jokes and charms the audience with his sleight of hand tricks.

Magic is intriguing because it is an act that engages performer and audience. If audience doesn't believe, performer has no reason to be there. He's got little eyes upon him who believe and follow his lead, gulping down each action as factual.The ball disappears and turns into a bird. That's obvious and true.

For adults, we watch a trick for the first time and think "Wow, that's so cool! He really did that!"

He does something again, and we think "Ok, now how did he do that?" You look for a fist hiding something or try to peer into the bag and check for double pockets.

And, let's say you do realize how he's doing his trick, you're suddenly bored. You've lost that belief in him that he is doing the Impossible and remember he's just regular guy who has a reliable day job.

Therefore, in order to truly enjoy magic, we have to suspend our criticism and analytical way of looking, and stop trying to figure everything out. We really have to look at it as factual as opposed to a problem that must be solved.

By the way, this magic show was exceptionally difficult as I had left my phone across the room. I fought hard against getting up play with it during the show. In the end, I just waited and tried to live in the moment.
at 11:37 PM