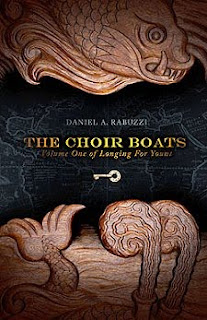 This book fell unexpectedly into my lap. I wouldn't have picked this book off the shelf since I don't particularly read fantasy genre books. While I loved Harry Potter, I could not get through Tolkien. I decided to read this book based on the website of the author, Daniel Rabuzzi. The site had a strong presence of fairy tales and fine literature, as well as fantasy, so I thought there might be something for me. We have to diversify our reading repetoire, don't we.

"The Choir Boats" is definitely a unique book as it takes place in 1812 London. So right there, my imagination is charmed. By setting the story 200 years ago, the territory is known and unfamiliar at the same time. Also, the time period brings another element to enhance the story - it forces a certain honest sense of time and technology. Our world today is interconnected - we're virtual, we're overnighting, we're tweeting, we're googling, we're just overall faster global community. So, now we're pulled into a quiet era where Atlantic trips take months.. letters get lost and change lives.. letters arrive mysteriously followed by equally mysterious people.. the world you know is the one in your backyard.
The protaganists - two practical British businessmen - are lured into this alternate realm with a key and a promise of gaining their hearts' desire. Sally and Tom, the orphaned neice and nephew, are lured by a subconscious calling that now surfaces. They discover hidden talents, and achieve recognition and acclaim for these unknown skills when they enter Yount. To get your head around Yount, there are special portals to access it, such as the Bermuda Triangle. There's no moon on Yount. Some of its people want to merge with the karket-soomi (our world), while others are hungry for power and domination.
The writing in this book is superb. There's representation of the Yountian language and traditions - the world and culture is well-defined and tight. The language used is poetic, crisp and erudite. I saw the nod to Lord of the Rings (sailors joking about Fred and Sam who had to return a ring to a mountain) and our favorite Hogwartian Professor Dumbledore. I'm sure there were others, which I could identify had I been more aware of the genre. The characters' values and belief are set to represent their own society. However, once out of nineteenth century England, one does loosen up a bit. It's intriguing to see the feminist twist on the characters from 1800 falling into a female dominated society, and reaching to the point with females holding the powers to save others. Rabuzzi also layers the fantasy with love stories, as well as political conspiracies. It's definitely set itself apart.
This is the first book of a trilogy so there are some threads left to tease and carryforth into the next book. There is a certain steadiness to the story and I could have used a glossary at certain times (e.g., exactly how does the fulginator work).
Once you enter the world that Rabuzzi has created, you're pulled into it quite easily and end up being in it for some time; I found myself wondering about different aspects throughout the day.
at 11:27 PM