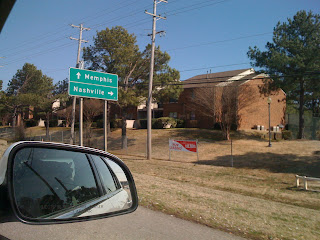 Last week I went to Memphis, TN for work. After a couple of days of meetings and conference calls, we did have the schedule open up in the afternoon. So we ran downtown. We have to see the mighty Mississippi!
First of all, I'm fascinated by the southern culture. I've been working with people from various parts of the country lately, and more are from the South. I find the South exotic. Waiters call me "sweetheart" when they refill my glass. An application developer replies to a client's questions with "Yes, Ma'am" and "No, Sir." Baked beans and overcooked greens are side dishes. And, if something can be fried, it will be. Cows are sacred in India. Pigs are sacred in the South, but for different reasons. Their cute faces adorn many barbecue joints. The tighter and greasier the dive, the better the ribs (or so I've been told).
We had lunch at Morgan Freeman's restaurant and blues club, Ground Zero. I saw fried green tomatoes on the menu and I knew we had to go. I've never eaten anything like this before - crispy cornmeal rounds and the tomatoes just melt when you bite into them! They had "Mississippi Cavier," which was a salsa of black eyed peas.
We made our way to the Peabody Hotel. Yes, we saw the famous Peabody ducks floating in the fountain. The hotel itself was exquisite. In the days of cookie-cutter Marriots and Hiltons, it was refreshing to step into a building of classic architecture and luxury. However, let me warn you about the gift shops. What started as a simple hotel attraction with some stray ducks in the fountain has bloomed into a thriving business. Any item with a duck on it is sold in the hotel. For example, beautiful hand blown wine glasses with a colorful mallard on the stem retails for $90. So tempting, but not this time.
We stopped by the Cotton Museum and the curator had lots of stories to share about local culture and events; they filmed "The Firm" in this building. After realizing we weren't going to take the short tour of the museum, he suggested we hop on the Riverfront trolley and take a ride through Memphis.
Overall, we have a mixed impression of Memphis. FedEx seems to own the city with the huge convention center, airport, and highways. University of Memphis Pyramid Arena in the middle of the city certainly does make you say, "Hmm.." The city is certainly coming up with all the hotels being built as well as the gorgeous homes along the riverfront. The trolley took us past the National Civil Rights Museum, which was built on the site of Martin Luther King's assassination.
We crossed the river into Arkansas, just so we could say we did. We took the first exit and came back to Memphis.
We wanted to go to Graceland, but we didn't have time. Later, I learned my father felt very strongly about Graceland, and thought every American should see it because of the historical nature of it. My father also happened to witness the Peabody Ducks march.

Email ThisBlogThis!Share to TwitterShare to FacebookShare to Pinterest
Labels: Travel

Nice travelog about your trip to Memphis- and enjoying southern hospitality!:) Obviously, being a southerner, I am biased!

Memphis is one of my favorite cities in the world..for sentimental reasons..as well as the ambience...hard to describe!
I never get tired of visiting Memphis..hope you return and def..pay a visit to the King's home (Graceland!)

When driving across the country we drove by Memphis (and over the Mississippi river). I would have liked to stop because the town looked interesting but we had no time :(
Living on the coasts of the US(east and west) you don't learn that there is a whole new world in the middle .

Maria/ J Doe-
I think the south is an interesting place to visit, but I'm not sure if I could live there. I feel the same way about CA. I love the rolling hills of PA too much!

"Cows are sacred in India. Pigs are sacred in the South, but for different reasons. Their cute faces adorn many barbecue joints. The tighter and greasier the dive, the better the ribs (or so I've been told)." - Those sentences made me laugh. I've never heard anyone refer to the "cute faces" of the pigs of the BBQ joints. But, your information was spot on- in my experience- the more "run down" looking the restaurant- the better the BBQ- and I LOVE pork BBQ.

I'm glad that you enjoyed Memphis and a little taste of the South.