The Philadelphia Art Museum had an exhibit of Indian artist Nandalal Bose, which combined paintings from San Diego and New Delhi.

This was my first exposure to this period of Indian artwork. Bose benefitted from the artistic cultivation from Tagore's school Santiniketan. He strove to build the Indian cultural identity in art by drawing inspiration from Hindu mythology and local villagers and tribes.

For a sampling of the artwork presented, check this slideshow. There were many paintings, which were absolutely beautiful. I was pleasantly surprised to see the influence of Chinese and Japanese painting techniques in the artwork. I never realized there was such a mesh.

By the way, this was my daughter's first visit to the art museum. She was excited to see the Indian art and recognized Bose's religious images of Lakshmi, Shiva and Krishna. She questioned why they looked different, so I tried to explain "artistic interpretations" to her.

Both of us were fascinated by this painting, "Annapurna." The 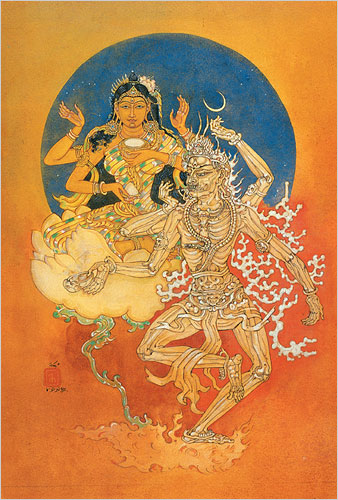 side description explained this was Bose's comment on a 1943 famine in Bengal. Annapurna as Shiva's wife (Parvati) represents nourishment and abundance of food. In this painting, she has the bowls of rice that she's offering. Shiva is dancing, which represents destruction. However, this Shiva has a skeletal appearance, which emphasizes death. And, he has an outstretched hand.


The museum had a short film on the history of Santiniketan and how students were encouraged to look at the world around them for inspiration. 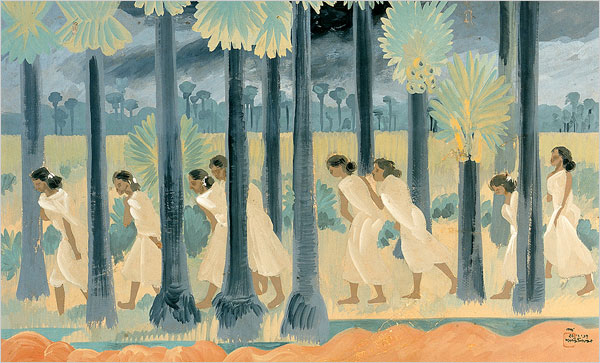 It was nice to see black and white images in this film of students, teachers and also the tribal villagers. This painting shows girls walking through the woods, and I could almost touch them. The landscapes of Bengal are so distinct in all these paintings - rolling hills, waves from the ocean and the trees that stand straight.

It was exciting to learn that Bose was a man who was touched by Rabindranath Tagore and M.K. Gandhi - the two men who uphold India's torch in the light world history. Tagore guided Bose, while Gandhi encouraged Bose's contribution to preserving Indian artistic and cultural heritage.
at 11:07 PM

I can't wait until I can bring my child to a museum. It must have been exciting for you to see the excitement in her eyes.

Yeah, the best part was the modern art section. She asked "Why are people staring at the Coca-cola bottle?" People smiled because they sensed the irony of it.
Then we played games with the Picasso -- find the guitar in "Man with a Guitar". ("WHAT! WHAT GUITAR! WHAT MAN?!")

That must have been reaaly really cute. Wish I was there.

Girl, You get an award from me. Please accept it.

Hey Ashiniben, I really enjoy reading your blog. I've been wanting to go to the art museum to see this exhibit and I just found out its no longer there. Thanks for sharing your experience. Sounds like it was a good mother-daughter bonding experience. If you are in the Philadelphia area please give me a call I'd love to meet up with you.