On the Job Training - Motherhood 13: Secrets

Part of gaining independence is stepping away from parents and having a life outside of the parents. This is when they form secrets.

In the past, she had a little box and put one of my necklaces in there. She said it was a "Surprise! Don't look!" I knew what it was and didn't care.

Last week she went to a birthday party where they painted jewelry boxes. I admired her box and I listened with half an ear when she told me the lid was glued and didn't open. Later I checked the box and saw it did. I noticed the little things in there, but didn't care (a princess hair brush, hair accessories, shiny stones).

The other night, she wanted to brush her hair and made me close my eyes while she went into her box. She didn't say where the brush was, but I obviously knew.

Anyway, I don't think I will go into her box. As a girl I always had special boxes. There were 2-3 shoeboxes, which held movie stubs, notes, programs, pretty ribbons, and shells. I have them in my basement now. I know what it's like to want to capture special moments - either through material objects or on paper. I had my first diary when I was eleven and I kept journals on and off through the years.

I know my sister and I struggled with our mother to keep our secrets in tact. We begged her not to touch our "stuff" and we could sense when she had. I don't think she ever read a diary - I was hiding it especially from my sister's prying eyes. From my mother's point of view, she was just going in our rooms to clean up and if we did it ourselves, she wouldn't have to come. Also, she wanted to make sure we were not doing anything disagreeable (on drugs, on birth control, talking to boys, failing exams).

However, I am now on the other side. I'm the party being barricaded. I know that in order for me to build a trust with my daughter, I have to pass many tests. I'll be tested to see if I can be trusted to hold certain secrets, not go forth to others with it, and respect the boundaries.

I still remember key conversations with my mother that shut windows of communication between us. Ordinary, everyday conversations about school and friends that happened when I was thirteen to seventeen.

I also see her saying something casually and then when I ask her, she will quickly say "Nothing!" and make up something else. I try not to be judgmental when she's telling me things.

Another mom told me this a few years ago - every night before bed, she would ask her daughter to tell her a secret and she would tell her a secret in return. The secrets were nothing big, though important to the girl. However, it was part of the building the relationship. Her daughter was eight or nine at the time, and I don't know when she started. I hope that this would set her knowing there was one parent she could confide in when she needed to.

Since Annika does not have siblings, I feel I need to be that confidante for her. However, I'm still the "mom" and when she says "Nothing!" to me that shows she knows my authority, which is good. So, now I need to give her space.

My favorite quote about motherhood: "A mother is not a person to lean on but person to make leaning unnecessary." (Dorothy Fisher)

By the way, this is a Mother's Day picture Annika drew of us. She's the one with long, straight black hair and I am the one with light brown hair with pink streaks and orange tufts. In reality, she has short curly/wavy dark brown hair and I have dark brown hair with reddish brown highlights (not orange!!). I thought it was kinda cute because we're almost the same height. I don't know if she considers me as her equal or she is my equal. I love the butterflies though. 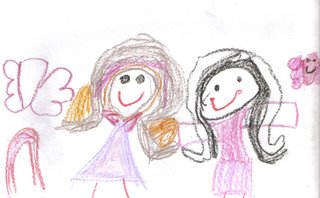 What a cute picture!
And I loved the stories about the secret box.
I hope you have a great Mother's Day. You sound like a wonderful mother, and I'm sure Annika thinks so too

I love Annika's artwork :) My thank you card for the cake was once of the best I've received :)

Wow - how much talent can one family have? Mom weaves words while daughter wields brush - you have your own pen and brush seminar right there :)

Maybe I'll start a website for Annika's artwork. There was a recent picture that I liked where she drew herself as a mermaid with a purse, Ariel and Michael C from her class!